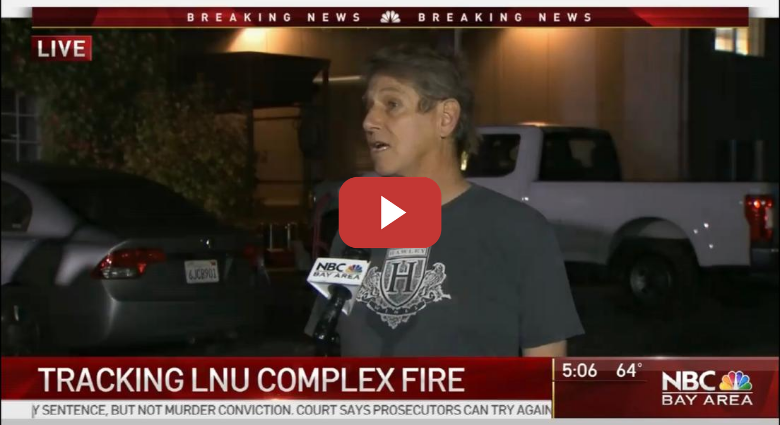 NBC BAY AREA - "Winery owners of the wine country are very nervous. This is what some of them are saying as they preparing for one of the most crucial times of the year, usually they'd be getting ready for harvest right now! Today in the Bay, Cierra Johnson, live at one winery in Healdsburg this morning. It is squarely in that fire zone:"

Cierra Johnson (NBC): "Yes Good morning. Folks here in Healdsburg have been under that evacuation notice for about a week now, and as the fires would come in, I mean people have just been really nervous for a week. But we are here at Hawley Winery with the owner, Mr. John Hawley, who has really had a birds-eye-view of everything that's going on in this area. I guess initially you've been through this before. How did you feel just knowing that things were picking up so quickly in this area?"

John Hawley, "Well I just worried about it. You know, I wanted to know where the fire was, where it was coming from. Our biggest worry was that it was gonna come across the face of Bradford Mountain, and if it did, it would come down and there are about 40 homes down here, in the trees, places that can be hard to defend, down little dirt roads and so forth. So I just would go up to the fire on a daily basis on this little four-wheeler, and check it out, talk to the fire guys."

Cierra: "What were they saying when you were having that conversation?"

John: "Well it was very serious. I remember going up there I remember it was about 3 or 4 days ago and Fred Peterson, who is a retired firefighter who worked for the Geyservillle Fire Department, kinda headed up the team on this whole road on this side of the mountain. He was coming towards me in his car and I pulled off to the side and he stopped and he looked real grave, and I said, " How's it going" and he said, "Not good." Then I went up and I could see that the flames were all coming up. We had a lot of air support, air support was really fantastic. We had a lot of airplanes coming in including these big 747s, you know, these gigantic things dropping fire retardant. And they did a really terrific job. It was just like a war zone up there; you could see big flames coming up here and flames coming up there, coming up the canyon at Pina Creek and the wind was directing it our way. It was pretty frightening. There was one home owner out there, way out on the edge, had a really great viewpoint. He had built a tower next to his house, for stargazing, and from that tower we could just see the whole area and what was going on. We were just hoping the fire would continue to head south, which is mostly has. Of course it's in danger of a lot of people down this way and the firefighters had to make decisions about you know , well, what areas can we save and what areas are we going to have to let burn."

Cierra: "You mentioned the wind kind of being the rogue issue there, I mean, you know you didn't know which way it was gonna turn. How did it feel knowing that at any moment just with the shift of the wind, you could be at danger- your business could be at danger?"

John: "Well yeah, no, its absolutely a problem, and it's what I worry about and so I try to keep in touch with what was going on with the wind. At first it was coming from the North which was nice because it was blowing all the smoke away from here and we had clear skies here even though we could see billowing smoke heading down that way. Later on, when the winds started blowing from the South, we were a little concerned that it was going to blow the fire around that backside of the mountain, which would have been really impossible to do much about because there is so much fuel there. Like I said, it hadn't burned over since 1972 and it's just a tangle of brush. Fortunately they did a really tremendous job and by yesterday afternoon all that was left back there in a lot of areas was blackened areas, ash and a few smouldering stumps."

Cierra: "Well I'm glad to know that for the most part everything out here is pretty much good and that you were kind of able to keep an eye on everything from your perspective. I mean this has been going on for days now. That first warning was just issued on Wednesday, and here were are just a day away from when that first warning was issued and folks still shaken up from what is going on. We are live out here in Healdsburg. Cierra Johnson for Today in the Bay." 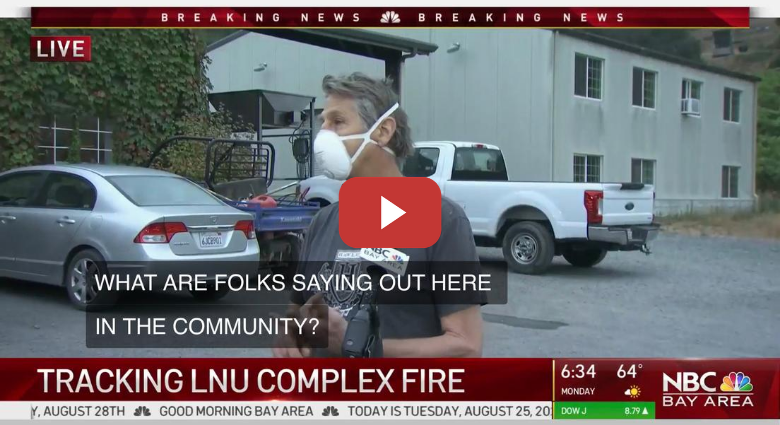 6AM August 25, 2020
NBC BAY AREA - "We are also watching Sonoma County for almost a week now. Many in the Healdsburg area, they have been in Evcauation warning, not to mention all the Red Flag warnings that we've had as well. But finally, a little bit of relief. Today in the Bay, Cierra Johnson, live from Healdsburg this morning where conditions are said to be starting to improve. Cierra?"

Cierra Johnson: "Yeah, Good Morning, exactly- there has been a lot of aid coming in to help knock down those fires. Those notices were issued, but we thankfully didn't get that lightening and thunder that kept that notice going. Right now I'm in Healdsburg at Hawley Winery with Mr. John Hawley, the owner of this winery, and he's really had a birds eye view, a great perspective from everything going on in this community. I guess starting off, we talked a lot about what you saw last time, but I guess in this half hour- How does this fire impact your business and how does it impact your product?"

John Hawley "Well my son is the winemaker now, though I'm involved. And there is some concern about smoke taint in the grapes because the grapes absorb whatever aromas are where they're growing. Fortunately, though for the most part the fires have been blowing southward that most of the vineyards have been pretty free of smoke and I don't have tremendous fear of it. But I really have no idea what it's - I haven't been out of here in a week and I don't have any idea what it's like to the South, I've heard it's pretty smokey down in Santa Rosa and I suspect in San Francisco and all around the Bay it's - they're breathing our smoke. We've been fortunate that we get a lit of the wines from the north and as you can see it's a little smokey here but it's not bad.

Cierra : " What is the vibe here in town. I mean you've kind of been on pins and needles for a week. What are both the business owners and the residents- what are folks saying out in the community?"

John: "It just seems like it's one thing after another. We got a pandemic, in the wine business that's been rough on us because restaurants are mostly shut down, tasting rooms have been shut down and are just slowly opening. And now of course we got the fire and people are not going to want to come to the wine country, at least not until things clear up. So, it's been difficult and we of course have to do our social distancing. We can't have people coming into a wine bar like we used to so, things have changed and they may continue to be that way. So we're kind of bracing for life isn't gonna be the way it used to be."

Cierra "Exactly well thank you for getting up early with us. That's something we've been hearing a lot is just folks are just bracing for whatever Mother Nature is throwing their way. Cierra Johnson for Today in the Bay."