This year’s harvest ended like an action movie! While most of Sonoma County was being evacuated due to the Kincade Fire, John and Austin stayed behind to press off our last fermenting grapes of the season. Powered only by generator, they pressed out Cabernet Franc as over 5,000 firefighters and dozens of aircraft battled a blaze just over the hills that threatened our towns of Healdsburg and Windsor. We feel very lucky to have our friends and family safe and are indebted to the heroic efforts that saved our community from certain devastation.
The 2019 harvest was not an easy one, but one worth the toil. We knew in June that this would be a late harvest. The region experienced a hot summer which paradoxically delayed ripening; when temperatures continuously reach above 90 degrees the vines will shut down resulting in slower development and longer hang time. Veraison (when the grapes change from green to red) is a signal that harvest is about a month off, yet there were still green grapes on the vines in August. We picked our first grapes, apart from the Viognier for sparkling, on September 13th and our last pick was on October 15th. We are used to and plan for a two-month harvest so this one was extremely condensed and very atypical. With just half the time to process everything, we quickly became maxed out on crucial elements such as tank space, picking crews, and just plain hours in the day. In the end, we were rewarded for our long hours with amazing concentration of flavors and balanced acidity.
We are relieved to have made it through such a stressful and challenging harvest and grateful to have a family of club members that support and appreciate the wines we work so hard on all year long.

We are blessed to have a healthy and bountiful organic vineyard, especially because being certified organic means that we are unable to use chemical fertilizers in our soil. Instead, we grow a cover crop to enrich our soil with organic matter and nitrogen to feed the future vintage. Each November, after the last of the fruit has been picked, we sow a special mixture of seeds in between vineyard rows. This seed mixture includes nitrogen-fixing plants like sweet pea, bell beans, vetch, clover and oat straw, which grow over the winter and into spring. These plants produce nitrogen compounds and, when they die, release it to be used as nutrients for the vines. By mid April we begin mowing the waist-high vegetation and till it into the soil so that it will naturally compost itself and become food for the budding vines. 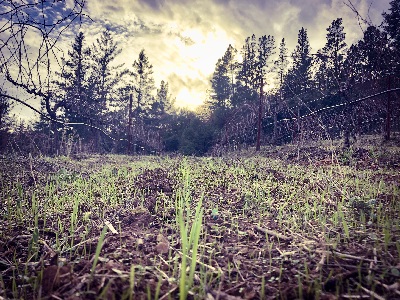